One of Europe’s most revered musical traditions will take center stage in September at The Varaždin Baroque Evenings festival in Varaždin, Croatia. Recently featured by the New York Times, this annual event celebrates the rich artistry of the Baroque period (late 16th century to early 18th century) with cultural exhibits and other exciting enterprises.

Founded in 1971, this prominent festival was initially inspired by the 140th anniversary of the Music School Varaždin. Over the years, the festival has grown exponentially. What started as a three-day festival now lasts for ten days as it expands with new locations, content and musical talent.

In 2010, a new tradition was born as the festival began partnering with different countries. This year, the festival will take on a Hungarian theme. Perhaps it’s these variations (and fugues) that keep the event fresh, inspiring audiences to return year after year.

The city of Varaždin is proud to host this fantastic event, which unites famed artists and ensembles with teachers, performers, and musicologists from across the globe. During the festival, orchestras will perform in various theatres and cathedrals around the city for everyone to enjoy.

In addition, the festival will host a variety of cultural events, ranging from art exhibitions to culinary attractions. While the festival’s principal draw is Baroque music, it will also incorporate the grandeur and opulence of the era’s art, dance, architecture, and gastronomy. 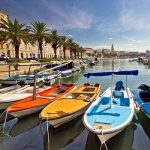