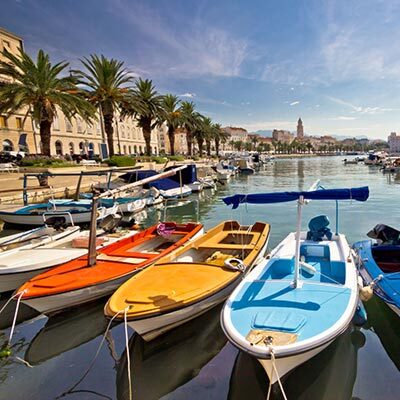 Croatia is booming as a tourist destination and Dalmatia – with Split as its largest city – is going through a renaissance in terms of infrastructure development and tourism services. With tourism up 20% in the region, backers are investing in exciting new hotel projects.

There will be brand new hotels in Split, as well as hotels that are hoping for refurbishment and updates. The local newspaper Slobodna Dalmacija reports that Split has over 15 hotel projects already in process of being built or breaking ground soon.

Split’s most exciting news is the arrival of the Westgate complex. Although the first tower is already built, the second tower “Tower B” will be the tallest building in Croatia at 110 meters high! Tower B is expected to become a Marriott International Hotel, and it will have 189 rooms, a wellness and fitness center, and a high-end restaurant and bar. The construction is scheduled to be finished in Spring 2018, right in time for Croatia’s busy summer season. The drone footage of the construction was recently released – you can watch it here.

The area around Split should have newcomers too – there is a hotel coming soon in Varoš and Vukovarska Street. Bačvice, a well-known beach and seaside part of town will get plenty of new hotels as well. One future four-star hotel will be near the beach and is expected to have 24 beautiful rooms and great accommodations. The Hotel Salona Palace recently opened in the Roman town of Salona, only 5kms from central Split. The boutique hotel has 44 rooms, a spa, and wellness center, and offers a free shuttle between the hotel and Kasjuni, one of Split’s nicest beaches.

There will be a new hotel in Diocletian’s palace right next to well-known Hotel Vestibul. Based on reports, the Swiss co-owners will rebuild the Central Hotel while upgrading the neighboring Cornaro Hotel. Rumor has it that a former soccer player will build a heritage hotel in the heart of Diocletian’s Palace, but it’s too long term to know the specific details.

The city of Split is developing but sticking to its charming roots, meaning there are more opportunities to have a high-end, quality vacation without the headache of staying far out of the city or settling for cheap, chain hotels. We’re excited to see what lies ahead for Split tourism!

Why Travel to Croatia in the Springtime