Not surprisingly, Croatia is jam-packed with incredible historic monuments and landmarks that document its rich and diverse history.

The country has lived through Roman occupation, Venetian rule and plenty more, and these different influences can be found in every town and on every street corner today.

When it comes to historic landmarks, Croatia has them all – from Roman ruins, impressive palaces and castles to medieval churches.

Here are our top five must-see historic landmarks in the country.

The most accessible and the most frequented of Croatia’s historic ruins is the Diocletian’s Palace in Split. Every day, thousands walk through its main square of Peristil, perhaps not realising that they’re brushing past a near intact Ancient Egyptian sphinx from Luxor. Built in the early 300s (yes, that’s the FOURTH century), it was the home of Emperor Diocletian and his surrounding garrison. Still clearly visible are its gates, the Temple of Jupiter and Diocletian’s mausoleum, later transformed into Split Cathedral.

Explore Split on our Summer In Croatia Tour

A sumptuous example of Byzantine art and architecture, this sixth-century Euphrasian Basilica is found in the resort of Poreč, on the coast of Istria. It stands on the site of a former Roman villa, whose floor mosaic is displayed in the Basilica garden. The centrepiece of his episcopal complex, the Basilica was commissioned by the Bishop Euphrasius from the 550s onwards and the most striking features are its golden mosaics, particularly the one above the apse depicting Christ and the Apostles.

Visit Poreč aboard our Ultra Cruise

If it’s Roman ruins you want, the amphitheatre in Pula is a well worth a visit. Located right in the centre of town, the amphitheatre is one of the finest of its kind still remaining. With a complete ring of the outer wall still intact, it’s the best-preserved of Croatia’s ancient monuments and today houses concerts and festival (as well as gladiatorial re-enactments).

Visit Pula on a tailor-made adventure

Stretching out like the Great Wall of China, the Walls of Ston were created to defend the Republic of Ragusa, which today is Dubrovnik. From the 1300s onwards, a fortification 4.5 miles in length was built and painstakingly maintained. Interspersed by 40 towers, it also protected the precious salt pans nearby. Raided by the Habsburgs in the 19th century for their own constructions, the walls were also significantly damaged by a terrible earthquake in 1996. As a result, the walls now run for over three miles.

Visit Ston as part of the Jewish Heritage Tour

It’s strange to think of a whole neighborhood as a historic monument, but Dubrovnik’s Ol Town is exactly that. A UNESCO World Heritage site and its pristine white walls are a defining image. The present shape of the walls was built in the 14th century after the city gained its full independence from Venetian suzerainty, but the peak of its construction lasted from the beginning of the 15th century until the latter half of the 16th century.

If you want to find more about our bespoke tours that give a true and authentic flavor of Croatia, simply speak to a member of our friendly and knowledgeable team. Our team of regional experts – many of them on the ground in Croatia – provide a bespoke level of service that is second to none. With their in-depth local and regional knowledge, our team looks after you from start to finish, delivering itineraries that suit you and your needs and to create an unforgettable experience for you and your companions. 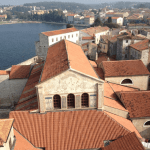