The Jewish community in Croatia dates back to the 3rd century AD, although little is known of the community until the 10th and 15th centuries. The community, over 20,000 strong on the eve of World War II, was almost entirely destroyed in The Holocaust. After World War II half of the survivors choose to settle in Israel while some 2,500 live today in Croatia. That number is an estimate and it is believed that the number of Croatian Jews is larger because more than 80 percent of the 1,500 members of Zagreb’s Jewish community were either born in mixed marriages or are married to a non-Jew. 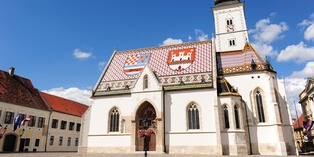 Arrival at Zagreb Airport and transfer to the hotel. Welcome dinner and overnight in Zagreb. In the 13th and 14th centuries, the Jewish community in Zagreb was led by "Magistratus Judaeorum." In 1456, Jews, along with most non-Catholic Croats, were forced out during the rule of the first Habsburg monarchs. After the Edict of Tolerance issued by Habsburg Emperor Joseph II in 1782, the Jews started settling in the Zagreb area and in 1806 some 70 of them founded the Jewish Community.
2

Morning city tour of Zagreb, including the fortified Upper Town, the city’s historical center, St. Mark’s Church with its multicolored roof, St. Stephen’s Cathedral and the Mirogoj cemetery (the Jewish part is well preserved among the rare ones in Central Europe). An organized visit to the Croatian Museum of Naive Art with more than eighty anthology piece paintings and sculptures, along with works of some twenty Croatian Naive classics, dating from the thirties of the last century until today. A city tour will include a visit to the Bet Israel Jewish Community Centre and the Zagreb Synagogue. In the afternoon an organized visit to the Museum of Arts and Crafts where a small Judaic collection is displayed.  Dinner in a typical Croatian restaurant. Overnight in Zagreb.
3

After breakfast a visit to the Museum of Arts and Crafts and a tour of the small Judaic collection accompanied by a curator. Afternoon at leisure. Depending on dates traveled, optional visit to the Festival of Tolerance. (JFF/Festival dates have not been published at this time). Overnight in Zagreb.
4

Bled, together with its surroundings, ranks among the most beautiful alpine resorts, renowned for its mild, healing climate and thermal lake water. The beauty of the mountains reflected on the lake, the sun, the serenity, and the fresh air arouse pleasant feelings in visitors throughout the year. You can enjoy a boat ride on Lake Bled, see the Church of Assumption situated on top of a small island in the middle of the lake, where you will explore the Bled Castle. Continue towards Ljubljana. Lunch is followed by a private city tour. The first Jews arrived in Ljubljana in 1213 and settled in the area around today’s Židovska Steza. Today an estimated 400-600 Jews live in Slovenia, most of them in the capital – Ljubljana. Return to Zagreb in the evening. Overnight at the hotel.
5 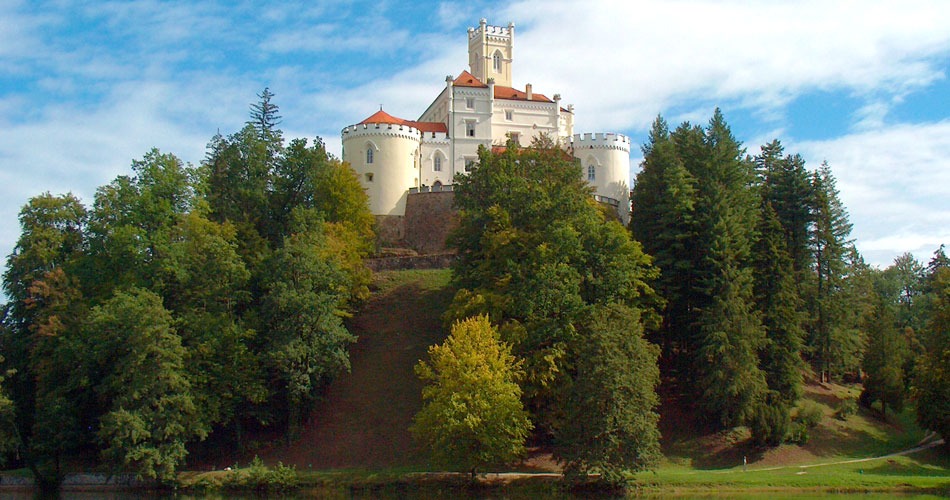 Breakfast at the hotel. Departure from hotel to Trakošćan Castle, a castle, a museum and a forest park with a lake. Lunch in a local, traditional rural estate.

The journey continues on to the fortified castle Veliki Tabor, classified as a prime category UNESCO monument. Extension to Kumrovec Ethno Village, the birthplace of Josip Broz Tito, with a presentation of the life of a countryman in Hrvatsko Zagorje during the 18th and 19th centuries. Return to Zagreb in the evening. Overnight at the hotel.
6

After breakfast, a drive to the Plitvice Lakes National Park for a visit. The 16 crystal-blue lakes lying at different levels linked together by spectacular cascading waterfalls. The forest around the lakes with a beautiful beech, fir and maple trees is the home to bear, wolves, wild boar, deer, and many rare bird species. The largest national park in Croatia, Plitvice was included on UNESCO’s World Heritage List in 1979 in recognition of its "outstanding natural beauty, and the undisturbed production of travertine (tuff) through chemical and biological activity”. Lunch is served in a local traditional rural estate. Departure for Split for overnight.
7

Morning sightseeing tour of Split, including the palace of Roman Emperor Diocletian, with Peristyle, Jupiter’s Temple and St. Duimus Cathedral. There are carvings of menorahs on the walls of the same room that houses the marble dining table in the Diocletian’s Palace. These carvings do provide evidence of an early Jewish presence in Split. Visit the restored Synagogue of Split, located along the narrow street called Židovski prolaz (Jewish Passage), the Jewish Ghetto and Morpurgo Library. Visit the Jewish Community Center in Split. Visit the Meštrović Gallery (a famous Croatian sculptor was married to Ruža Klein, a daughter of a Jewish merchant). Afternoon drive to Marjan Hill for a visit to the Old Jewish Cemetery dating from 1537, from where we enjoy a magnificent view of Split. Dinner is organized in a local style tavern (konoba) with a traditional acapella band – Klapa. Return to hotel for overnight.
8 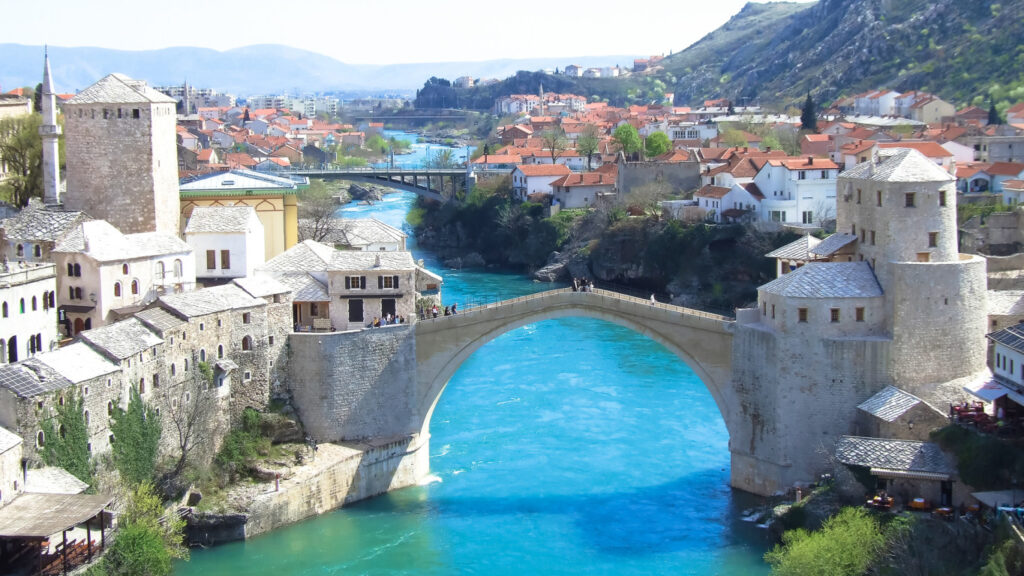 Breakfast followed by departure to Mostar, driving along the Makarska Riviera with long pebble beaches and across picturesque Neretva River Delta. Sightseeing tour of the Old Town of Mostar, recently included in the UNESCO’s List of World Cultural Heritage. Under Turkish rule, the city was an important trade settlement that developed on the banks of the Neretva River. We tour its elegant Bridge, Old Bazaar, the Mosque, and a typical Turkish house. We continue our drive to Sarajevo, the capital of Bosnia and Herzegovina. Dinner and overnight in Sarajevo.
9 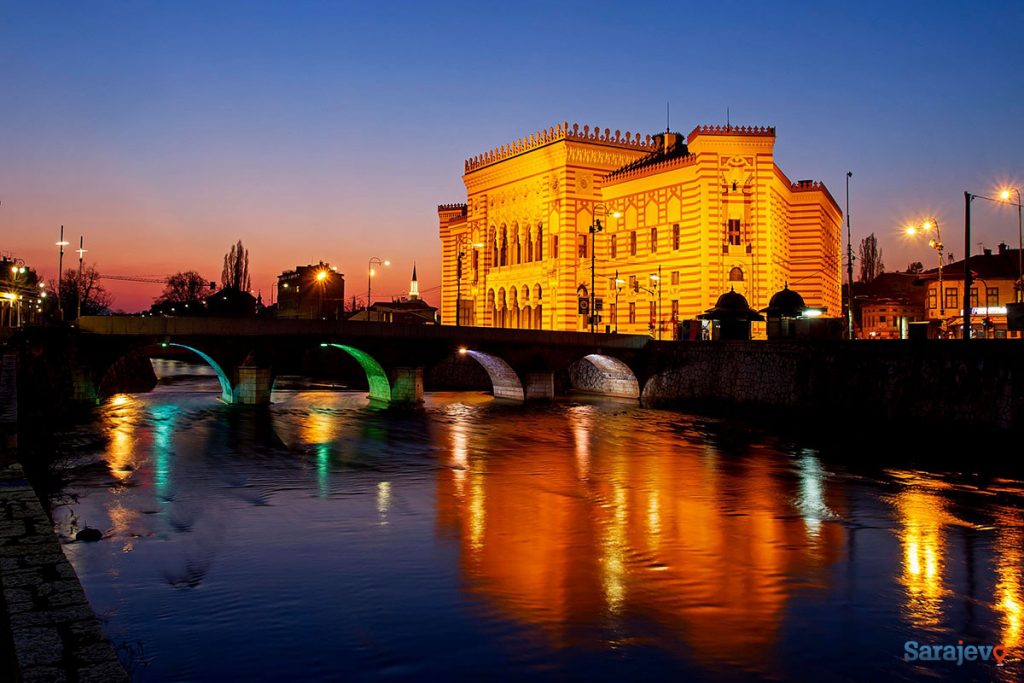 Sightseeing tour of Sarajevo includes the old colorful Bazaar Baščaršija, Gazi Husref Bey`s Mosque, Sarajevo War Tunnel and the National Museum that preserves the oldest Sephardic Haggadah in the world, produced in Barcelona in 1350. As tens of thousands of Jews fled from the Spanish and Portugal inquisitions, Sultan Bayezid II of the Ottoman Empire welcomed those who were able to reach his territories. The first Sephardic Jews arrived in Bosnia and Herzegovina in 1500 and settled mainly in Sarajevo, while the Ashkenazi arrived from Hungary in 1686. Visit the impressive Ashkenazi Synagogue, decorated in neo-Moorish style, built on the left bank of the Miljacka River in 1902. Visit to the Museum of the Jews of Bosnia and Herzegovina and to the Jewish Cemetery (second largest in Europe) where we can see Geniza, the graves of the used sacred books. Overnight in Sarajevo.
10

After breakfast, departure towards Dubrovnik. A stop at Ston, a medieval little town with the history that reaches back as far as the 14th century. It is a small town with the longest stone wall in Europe(5,5km) with narrow quiet streets, noble ancient houses, and traces of ancient cultures. Its former value as a “salt city” gets confirmed even today in the plants of the oldest active salt-works in the world.

These saltworks have remained faithful to the tradition and to the natural way of salt production. It has been well-known for its mussel and oyster-growing farm since Roman times, and the oysters from Ston (ostrea edulis), as an acknowledged natural aphrodisiac has made this region world-famous. Ston oyster and wine tasting at a local seafood restaurant. Afternoon arrival in Dubrovnik. The rest of the day at leisure. Overnight in Dubrovnik.
11

Morning panoramic tour of Dubrovnik, including a visit to the old Jewish Cemetery “Bet Haim”. Sightseeing tour of the Old City includes the Jewish Fountain, Franciscan Monastery with the third oldest pharmacy in Europe, Rector’s Palace and the Cathedral. From 1352 Jews were tolerated as itinerant traders in Dubrovnik although the city initially denied them residence. In 1546, a Jewish ghetto was established in a small street called Ulica Žudioska (Jewish Street). They played a part in international commerce and were pioneers in marine insurance.

Visit the Jewish Ghetto and the Synagogue of Dubrovnik, the third oldest synagogue in Europe, built in 1408. Situated within a 13th-century Gothic house, the Synagogue is one of the most cherished sites of Sephardic culture in the world. Visit to the Jewish Community Center. Overnight in Dubrovnik.
12 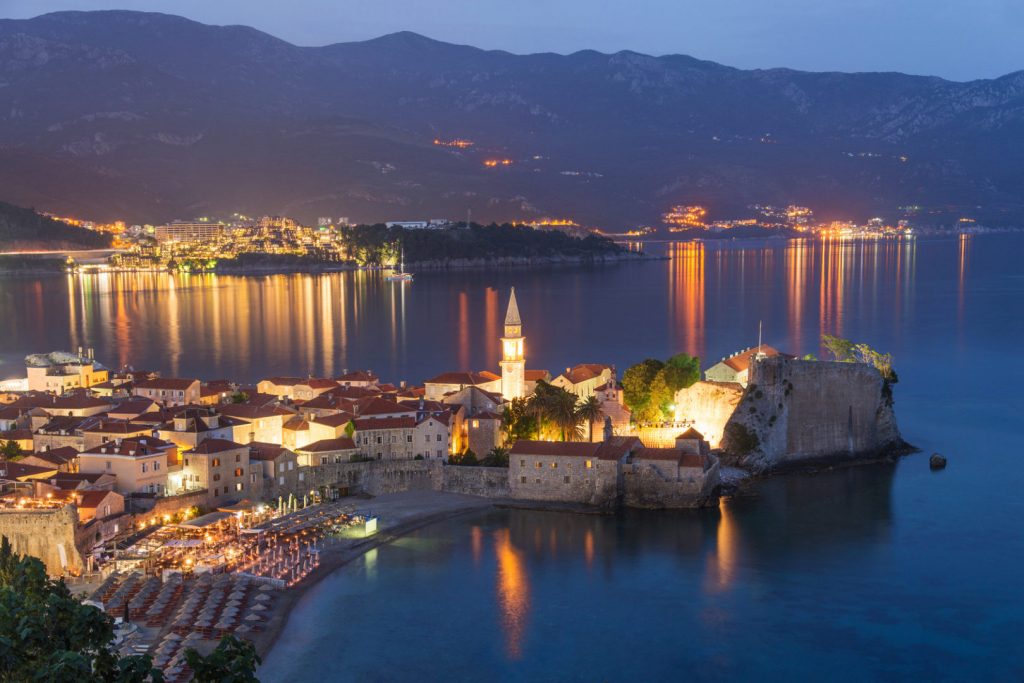 After breakfast, a full-day excursion to Montenegro Riviera. This notable coastal region is of primary interest to tourists in Montenegro. The Montenegrin Adriatic coast is 295 km long, with 72 km of beaches, and with many well-preserved ancient old towns. The main attractions along the north coast are: The Old Town of Herceg Novi, the old town of - listed with UNESCO world heritage sites, Boka Kotorska (Bay of Kotor), with the ancient small town of Perast, the old town of Budva - a well preserved old town, Sveti Stefan -  a small island hamlet turned into a luxury hotel, etc. Return to Dubrovnik for an overnight.
13

Breakfast at the hotel and check-out. Transfer to the Dubrovnik Airport.   END 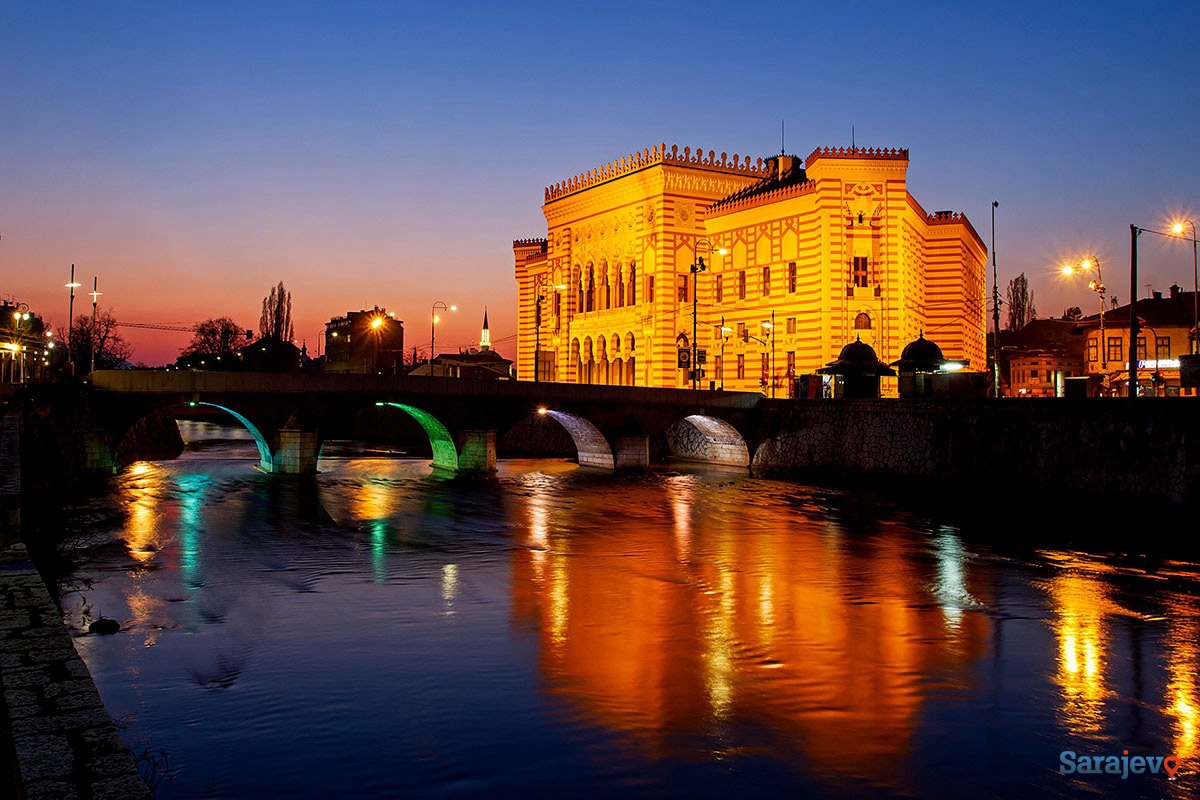 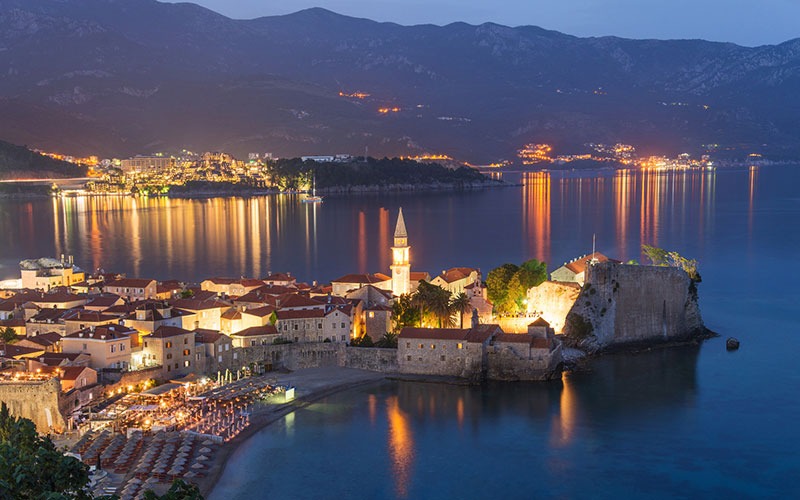 OPTIONAL EXCURSIONS: Instead of one of the suggested programs we can include either a visit to Hlebine and Podravina region from Zagreb, a visit to Jasenovac concentration camp and Lekenik village from Zagreb, a visit to Šibenik and Trogir from Split or a one-day excursion to Hvar Island from Split. Please Note: Croatia itinerary can be combined with other European countries and city programs. We suggest a combination with Italian Jewish Heritage (Rome, Florence, Venice, and Trieste), or Budapest and Hungarian Jewish Heritage! The program does not include: