11 Day Private Journey
Available from May through September 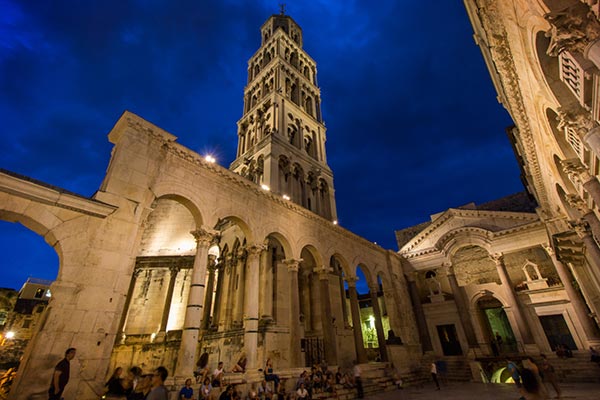 There’s no doubt Diocletian’s Palace is the top must-see attraction in Croatia’s second biggest city –Split. This UNESCO protected World Heritage Site is actually the heart of the whole city – almost two thousand years old, the enormous palace exists today as a “living monument” – meaning it’s dotted with quaint shops, galleries, cafes, restaurants and people actually live and work within its old walls. And that’s what makes it really special – it’s an ancient Roman palace absolutely integrated into the everyday life and doings of Split and its people.

The Riva, a marble-white and palm-lined connection of Split and the Adriatic is everyone’s favorite spot for socializing, coffee-drinking or just idle sitting on one of the comfy benches which face the sea. Riva is full of life throughout the day, especially during the summer, and you’ll always find people strolling along or sitting in one of the cafes. So, if you want to get a feeling of the local every day “buzz” be sure to grab your spot and you’ll soon experience firsthand how important and irresistible is the coffee culture in Croatia.

Bačvice Beach – The most famous beach in Split gives you a chance to blend in with the locals and play a game of picigin! Only ten minutes’ walk from the center, Bačvice Beach will show you this is a game suitable for everyone, no matter what age, sex or fitness level. All you need, besides balun (small ball), company and shallow sandy water, is a load of positive energy. And when you feel the urge for some refreshment and relaxation, you won’t have to go far – there are numerous coffee shops dotted along the beach.

Coffee on Riva– Enjoying coffee at this so-called ”city living room” is a must ritual for everyone. Numerous coffee shops are dotting Riva, so all you have to do is choose the one you like the best, lay back in your chair, observe the passers-by, forget time and rush ever existed and simply enjoy your summer holiday.

Suggested routing only, to be discussed and finalized with the Skipper 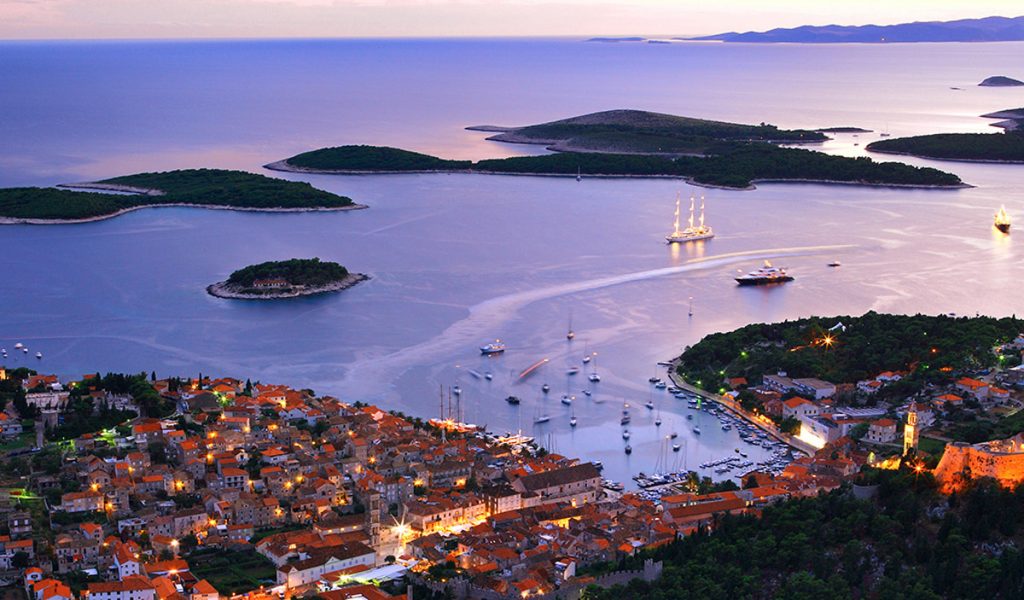 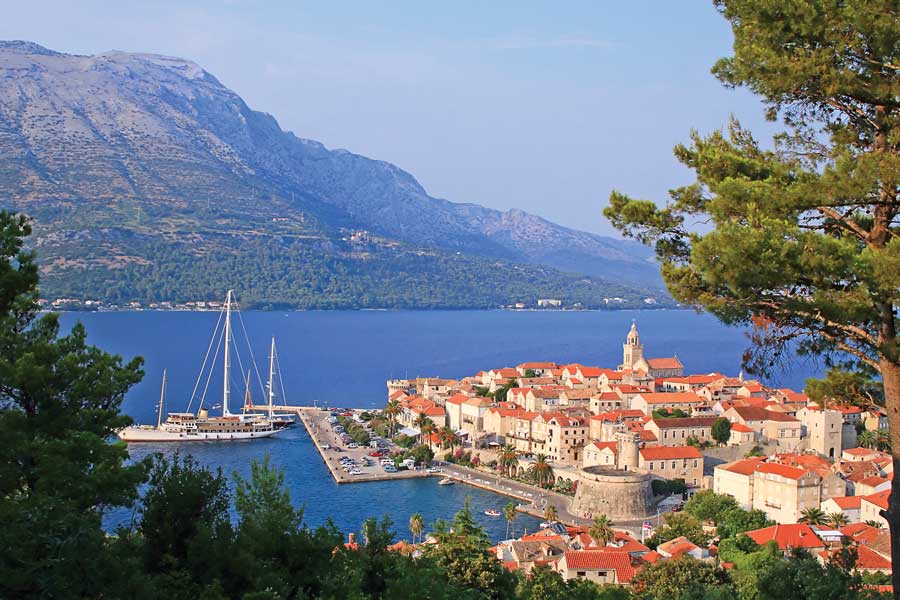 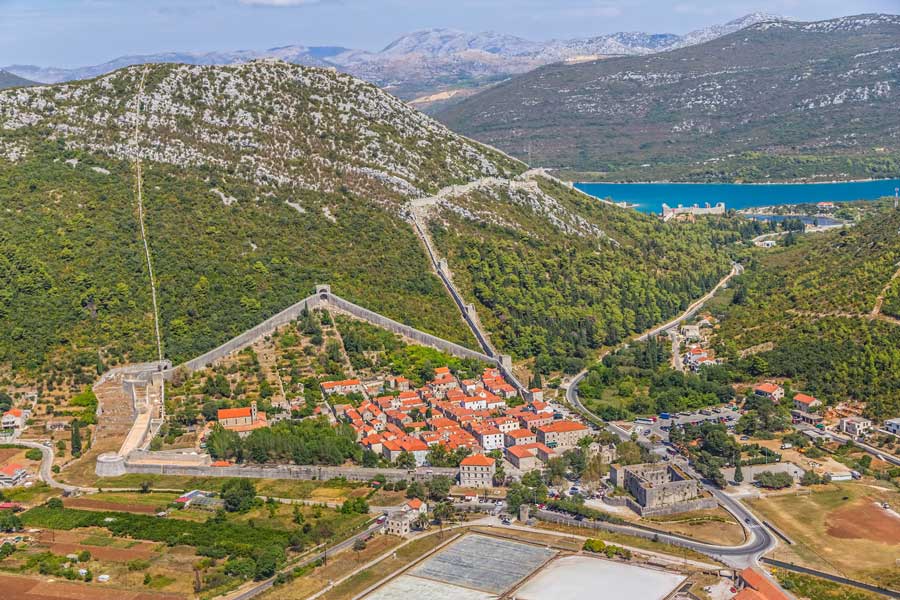 Ston is a small Mediterranean town situated on the Pelješac Peninsula, with a history that reaches back as far as the 14th century. It is a small town with the longest stone wall in Europe (5,5km), with narrow quiet streets, noble ancient houses and with traces of ancient cultures. Its former value as a “salt city” gets confirmed even today in the plants of the oldest active salt-works in the world. These salt works have remained faithful to the tradition and to the natural way of salt production which has not changed since then. The town is best known for its oyster and mussel beds, and during your tour, you will not only participate in oyster harvesting but also be served fabulous versions of these shellfish along with traditional dish buzara for light lunch. Pelješac peninsula is renowned for its spectacular coastline and historic towns and wine production. Enjoy the magnificent peninsula scenery and picturesque vineyards.

Dubrovnik is a medieval city on the Croatian side of the Adriatic coastline and treasure trove of cultural, historical monuments that were created throughout its thousand-year existence. In the past, it was a City-Republic, and alongside Venice one of the most famous cultural-economic centers on the Mediterranean. In more recent times, it has become the center of modern cultural and tourist events: a city of summer festivals – an international parade of top musical and theatrical achievements, a city of museums and galleries. These values have turned Dubrovnik into a place that offers a rich selection of various experiences and excitement, but also a complete holiday in a quiet and calming, mild Mediterranean ambience and wonderful seaside landscapes. 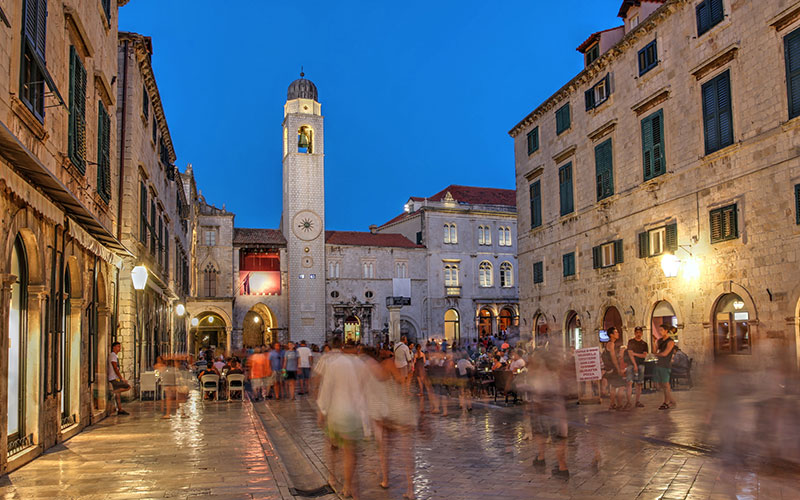 Dubrovnik is a medieval city on the Croatian side of the Adriatic coastline and treasure trove of cultural, historical monuments that were created throughout its thousand-year existence. In the past, it was a City-Republic, and alongside Venice one of the most famous cultural-economic centers on the Mediterranean. In more recent times, it has become the center of modern cultural and tourist events: a city of summer festivals – an international parade of top musical and theatrical achievements, a city of museums and galleries. These values have turned Dubrovnik into a place that offers a rich selection of various experiences and excitement, but also a complete holiday in a quiet and calming, mild Mediterranean ambiance and wonderful seaside landscapes.For such a small city, Dubrovnik offers quite a bit to see and do. Main attractions, which you can’t miss on a visit to Dubrovnik include:

Rector’s Palace – Right off Luza Square is the Rector’s Palace. It was the seat of the Ragusan government, where the Rector lived and worked. The first prince (Rector) ruled the Republic from here. After Napoleon’s army dissolved the Dubrovnik Republic the Rector’s position was reduced. In fact, a new Rector was selected each month.

The original palace was modeled after the Roman imperial palace, with some influences from Venetian palaces. In 1435 there was a gunpowder explosion that demolished the structure. It was rebuilt in a late-gothic style. There was another explosion in 1463, and an earthquake in 1667 that severally damaged the city. What you see now is the final redo that took place at the end of the 17 centuries.

The central portico features beautiful archways and a second story mezzanine. The rooms are interesting, and not so extensive you feel obligated to spend tons of time wandering through. For me, the highlight was the portico with the open ceiling and archways.
Pile Gate – This is the north gate into the city. It features a stone bridge with two gothic arches. If you exit towards the outside you can get to Tower Lovrjenac, something we did not do. On entering, the outer drawbridge is met by an internal bridge that leads into the city. If the light is right, some good shots are to be had from Pile Gate. My suggestion is to walk down the path to the left as you exit out of the town. at the end you’ll be at the bay I mentioned from the wall tour. There is a great view of the enormous Tower Lovrjenac and Tower Bokar with the Adriatic in the background.

Big Onofrio’s Fountain – You’ll see this round structure near the pile gate. It’s close to the entrance to the wall tour. It’s a 16-sided water fountain and is considered a masterpiece of engineering for the early 1400’s. This is not only for the design but for the design of the irrigation flow. The water that serves it is 20 kilometers away.

Church of St. Blaise & the Cathedral – While the Church of St. Blaise is worth seeing, mostly because of the religious artifacts in a small room behind the altar, I liked the Cathedral much more. At night the lighting is dramatic and great for night shots. The courtyard in front of it was not that busy when I was shooting, so I was able to take a long exposure without people walking through.

Franciscan Monastery – The Franciscan Monastery is a must-see for fans of great architecture as this courtyard and surrounding buildings are considered a masterwork of Dubrovnik architecture. The Roman-Gothic styling features an outside courtyard with the second oldest pharmacy in Europe, and it’s still a pharmacy today. Inside the library features 30,000 volumes of books and 1500 handwritten documents. The garden area is extraordinary. 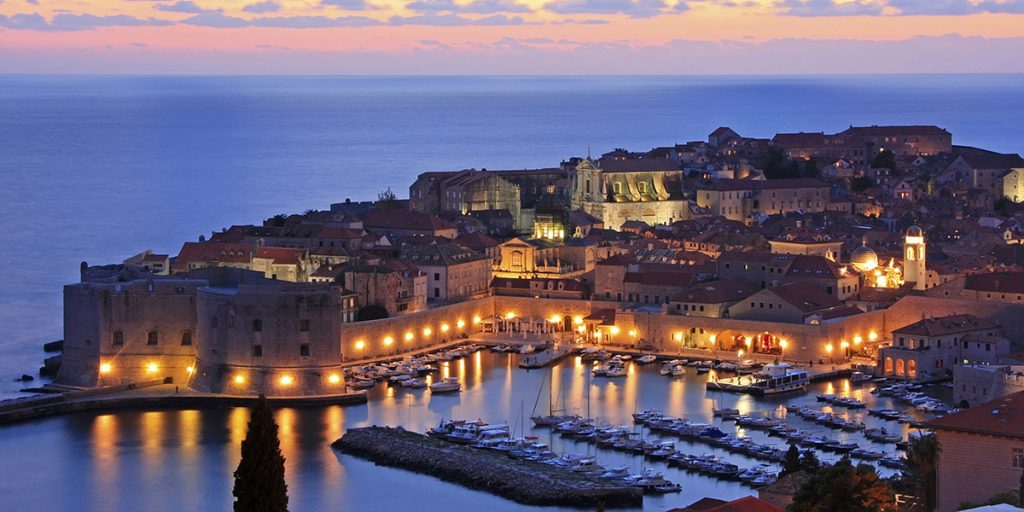 The program does not include:
• Meals and drinks not mentioned above
• Airfare, Travel Insurance
• Additional excursions and/or services not mentioned in the program
• Personal expenses (internet, telephone, mini bar etc.)
• Tips and porterage services

Dates and Details:
Prices are based on number of passengers traveling, type of Private Charter, and dates of travel
Hotels are not guaranteed until confirmed 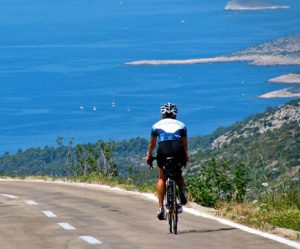